In the early summer of 1972, my adolescent wisdom directed me to competitive swimming.  Certainly not the fastest, nor the most coordinated 10 year-old girl in other sports, I just loved being in the water since I was a toddler.  So, I joined the summer swim team at our country club pool, which didn’t open until school let out in mid-June (yes, mid-June) and would abruptly close Labor Day weekend.  Not too long of a season, I thought to myself, so hey, this might just work for a kid like me.

Every weekday morning at 8:30, I’d ride my bike up to our club for practice by 9 a.m.  We had a 25-yard, 4-lane pool, which looked so big at the time.  Swimming in crowded counterclockwise circles and looking up at the rising sun with each breath, I thought it was pretty “neat” to swim outside.  The water would glisten from the sun’s rays in the deep end, and often, I would dream about diving down to the bottom and pick up pennies rather than completing my laps.

Practice ended at 11 a.m., and we had to wait 1 long hour for the pool to open for the day.  Just like summer camp, we spent that time laying on the lounge chairs wrapped in damp towels, gossiping about boys, weaving boondoggle, or playing games of pitch around the white-painted metal tables.  There were many, many great families – with plenty of siblings who swam, some as large as 5 in a clan.  Among those families included my wonderful cousins who lived right near the club.  Our golfing parents would look over the fence to check on us while they were passing by on Hole # 5.  And sometimes – if we were lucky, Dad would slip us some cash for the snack bar.

Home swim meets were extremely fun and quite exciting, especially for the little kids.  Held in the early evening, we’d help Coach Ed set up lane lines, flags, and the four cumbersome, wood-constructed starting blocks (which would give me slivers every time).  We hollered at our teammates to GO...while we poured red Jell-o down our throats for “energy.”   Our parents would venture from the golf course or the clubhouse to cheer us on, while enjoying a Tom Collins in a plastic cup.

For a few years, we proudly wore those VERY cool stars and stripes swimsuits – just like Mark Spitz wore in The Olympics in 1972.  We were all inspired to win 7 gold medals that year.

We traveled to other country clubs for away meets, and each opposing pool had different shapes, widths – and sometimes length.  Our team especially had “pool envy” with one particular club’s pool – and of course, was our arch-rival. The Cavalry Club* boasted an Olympic-sized pool that was T-Shaped and had an enormous team.  Therefore, the meets seemed to be crazy-long since the coach (and the parents) wanted to give every kid the opportunity to swim.  This era in the 70’s was really the infancy of age-group swimming, so learning the fundamentals – strokes, starts, turns – and rules – were quite important.

Another big meet was known simply as City/County.  That was held at what we thought was the “Mother-of-All-Pools” – the City of Syracuse-based Schiller Park Pool.  We would camp on the side of the large hill overlooking the pool and the City of Syracuse.  There was always a huge turnout for this meet, which is where I learned what a “heat” was.  We would swim against anyone and everyone in Central New York, and we would often cheer for our club rivals to beat the kids who we’d never seen swim before.

At the end of the summer, which for us was usually the 3rd or 4th weekend in August, we participated in the 2-day “Interclub” meet.  Interclub was usually hosted by one of clubs with larger pools (like The Cavalry Club, which could handle the numerous club teams – and also did a great job of moving the meet along).  It was always our final barometer, a measurement of our improvement from the start of the club season to the last lap.  It was also a bittersweet ending before school began after Labor Day.

My OGCC teammates, cousins, and friends would return to their home territory – and their surrounding school districts – Cazenovia, Jamesville-Dewitt, Henninger, and Fabius-Pompey to name a few, but they were always a phone call away.  Sometimes, we would see each other at off-season club functions and dinners – but barely recognizable since we had to get dressed up – and bundle up – since most often we’d visit the club during the chilly winters and soggy springs.

Many of us have remained friends and/or acquaintances throughout the years, thanks to our time spent at OGCC.  Many of my teammates stuck with swimming and continued to swim competitively.  I’m quite certain that my cousin took up diving for the entertainment of it all, doing some crazy stunts with his summertime buddies, but pursued diving a bit more seriously and ended up enjoying a successful high school tenure on the board.  Some of us evolved into “frenemies” since we remained competitive swimmers – and had to swim against one another in high school.  But no one can ever take away the fun memories of our team, the early practices and meets, and all those boxes of red Jell-O.

*Just a note about the Cavalry Club swim team – as great and as dominant as they were, one of the young swimmers from Cavalry Club disliked swimming so much, she would sneak away from the pool – in just her swimsuit – to the nearby driving range to hit golf balls.  Today, Suzy McGuire Whaley is President of the Professional Golfers Association.

I'm a “veteran” Broadcast producer as well as a former high school and collegiate swimmer who still loves to write. I hope to inspire others to stay afloat in these often turbulent waters while enjoying some new challenges in my middle age. View all posts by sinkorswim204 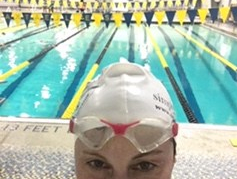 “The water doesn’t know your age.”